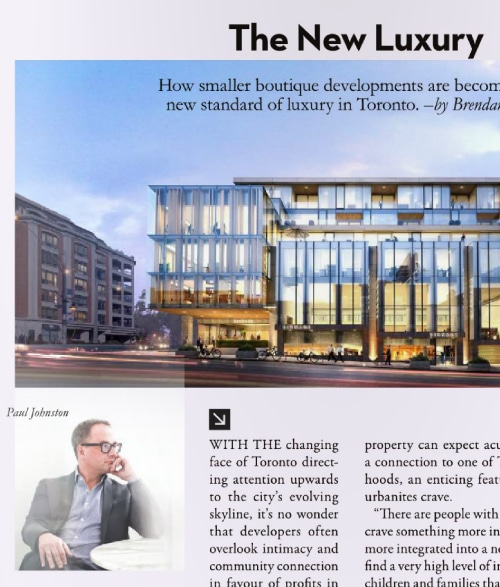 With the changing face of Toronto directing attention upwards to the city’s evolving skyline, it’s no wonder that developers often overlook intimacy and community connection in favour of profits in their coffers. While building bigger, higher and more opulent structures can be attractive for developers, the monoliths they erect often alienate homeowners as traditional units continue to get smaller and neighborhood infrastructure lags well behind the developments themselves.

Fortunately for homebuyers looking to build stronger connections with their communities, there are a small handful of condominum developments underway that aim to bring people back to the street level, all while providing homes
hat feel like actual homes.

“The demand for these smaller boutique buildings is growing astronomically because people see the real benefit. The challenge is that they are few and far between because the natural inclination of developers is to build and achieve the highest density as possible, which means a higher number of suites,” says Paul Johnston, one of Toronto’s leading real estate agents. And while these smaller developments may be uncommon, he continues, it it adds to the exclusivity of these buildings very much .”

One such development in particular is Cabin Toronto by Curated Properties. Located on the corner of Dovercourt Road and Sudbury Street, Cabin Toronto is a unique down-town development that merges condo life with neighbourhood living. With average unit sizes well above 1,000 square feet, buyers looking into the nearly sold out 25 units at the property can expect acute attention to detail along with a connection to one of Toronto’s most popular neighborhoods, an enticing feature that many young, successful urbanites crave.

“There are people with experienced life in a high rise that crave something more intimate, modestly scaled and much more integrated into a neighborhood,” says Iohnston. “We find a very high level of interest from both those with young children and families that are downsizing because their kids are preparing for university. They still want the intimacy of a small building and to know their neighbours, as opposed to feeling anonymous. The suites are larger and there is a higher percentage that other units are also occupied by other families.”

Similarly, Hill and Dale, a joint venture between Old Stonehenge and Clifton Blake, is a development that is taking a similar neighbourhood approach to the more affluent Rosedale community. With only 1? units, all starting at above one million dollars, Hill and Dale offers something different for those wanting to embrace the yoga studios, shops and restaurants of Rosedale and Yorkville while skipping the mansion and condo tower alternatives.

“Part of the value beyond the lifestyle component is the ability to live in something that is much more challenging to duplicate and, thus, has a higher value than the endlessly replicable towers in the city,” adds Johnston.

Sure, it’s nice to check out Buca at the Four Seasons or head downtown for a good time at the Drake, but you don’t have to live in a tower or one million—dollar-plus home to do it. Hill and Dale, along with Cabin Toronto, are two great examples of developers paying attention to the changing nature of the city and providing intelligent living solutions that bring community back to condo living without sacrificing luxury in the process.

See the full article at https://issuu.com/bayst.bull/docs/bay_st._bull_spring_2016/c/spqk0oq