In a lacklustre market, popularity of the urban townhouse stands out 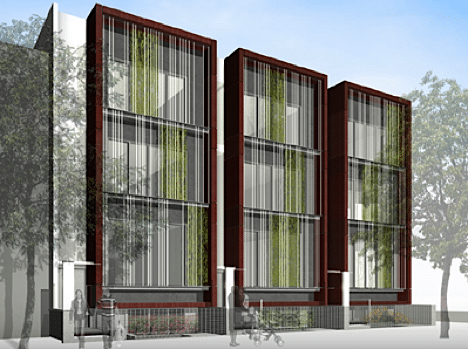 The Globe and Mail's Carolyn Ireland explores the strength of the urban townhome market in the city.

Paul Johnston is sorting the last of his stuff this week as he prepares to occupy a modern townhouse with an interior as white and spare as a Queen West art gallery.

A real estate agent, Mr. Johnston says all this packing is reminding him of the tribulations his clients have to go through every time they move properties.

But Mr. Johnston says he’s also excited to be trading a circa 1880 Victorian house in Chinatown for a newly built townhouse near Trinity-Bellwoods Park.

“I’d prefer to start fresh,” says Mr. Johnston after contemplating the new windows and other renovations needed at the current address. “I don’t want to do all that work.”

In the lacklustre figures that arrived from the Toronto Real Estate Board recently, sales in the resale market dropped 8 per cent in the 416 area in the first half of February compared with the same month last year. The one segment that shot up was townhouses, which saw sales jump 17 per cent. The average overall price in the 416 rose 4 per cent while for townhouses the increase was 12 per cent.

Jason Mercer, TREB’s senior manager of market analysis, says it’s too early to call any kind of trend: Numbers can be volatile in the opening weeks of the year. Because there are fewer total sales, one category can show a big swing if, for example, a newly completed project arrives on the market.

“It could be that people saw more of what they are looking for in that townhome segment,” he says.

But, Mr. Mercer adds, a lot of potential buyers stepped back from the market last summer and into the fall after the federal government tightened rules surrounding mortgage lending. Some of them could be back house hunting now because they have saved a bigger down payment or their income has increased. In other cases, people are looking to move for the usual reasons – their lives have changed and another property would suit them better.

He says the performance in the various categories will likely smooth out over the year, but the sharp divide between high-rise – where all the building has been going on – and low-rise, where it has been scant, will persist for a while.

Mr. Johnston, of Right at Home Realty Inc., has carved out a specialty in selling the sort of modern house he purchased from plans when the project was launched more than two years ago. He says many of the buyers of infill townhouses are moving up from units in mid-rise condominium buildings.

In many cases they have been living in a contemporary, downtown condo for eight or 10 years and they’ve become entrenched in the neighbourhood. But after a time they want more space and a backyard.

“I think for most of them it would be immensely challenging to contemplate moving to the suburbs or renovating an existing house,” says Mr. Johnston.

He adds that, in the next five months, nearly 90 families will be moving into townhomes that he has sold downtown.

Mr. Johnston says not many such projects are available because land is scarce and townhouse developments require more specialized and sophisticated design from architects and builders than many high-rise towers do.

The new construction sells for roughly $500 a square foot, Mr. Johnston says, and the bulk of townhouses being built are 1,800 to 2,000 square feet, though they range from considerably smaller up to 3,000 square feet. He says a possible silver lining to a correction in the high-rise segment could be that developers will find ways to build more low-rise dwellings. But while builders will chase the money if there’s demand in a particular niche, it’s not always easy to shift to a different type of construction – especially for builders who have aimed their projects at investors.

“I feel occasionally that big builders look at me like I’m evil incarnate,” admits Mr. Johnston. “But it’s not every developer’s skill set.”

by Carolyn Ireland, The Globe and Mail

See the full article at http://www.theglobeandmail.com/life/home-and-garden/real-estate/in-a-lacklustre-market-popularity-of-the-urban-townhouse-stands-out/article9146614/