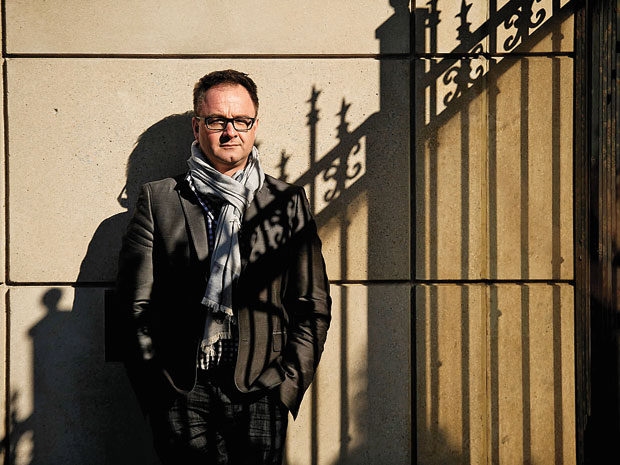 An exploration of the role of mid-rise developments in Toronto's urban fabric.

Paul Johnston just looks like he belongs around Ossington and Dundas. Clad in dark jeans, a black cardigan and black-and-white check shirt and thick-rimmed glasses, it would be easy to imagine him as the guy at the next table at, say, Pizzeria Libretto.

But it’s a Wednesday morning and Mr. Johnston of Urban Unique Homes is preparing for another day as head of the sales team on the mid-rise condominium project called Abacus. The hip neighbourhood is part of what he’s selling. Buyers have also been drawn to the sophisticated, angular design by architect Richard Witt. “They’ve been driven by the architecture of the building, unquestionably,” Mr. Johnston says.

A rendering for the Abacus at Dundas and Ossington, light-infused lofts starting in the $300,000s, with an emphasis on edgy design that suits the neighbourhood.

Beyond these things, the seven-storey Abacus is selling the idea of mid-rise condominium living itself. It’s a pioneering example of a kind of building — tall enough to boost population density of a neighbourhood, short enough not to cloak it in shadows — that the city believes will play an important role in future growth.

Between now and the early 2030s, Toronto somehow needs to squeeze in some 500,000 additional residents. Many will be unable to afford single-family dwellings, and there’s only so much room left for high-rises. The solution, according to the Avenues & Mid-Rise Buildings Study commissioned by the city and released in 2010, is to slot mid-rises into the spaces where shorter buildings now stand. Mr. Johnston calls it “delicate intensification.”

Says Mr. Witt, the architect, who designed Abacus while a partner at Raw Design: “The mid-rise guidelines are trying to put density, in a modest fashion, on the arterial roads of the city” without disrupting the nearby single-family homes.

Among Abacus’s neighbourhood-friendly design features is a shape that becomes narrower at the top. It reduces shadow impact while creating terraces for buyers to enjoy when the building is completed in 2014.

Dundas is one of many major streets that the city calls “avenues.” Others include Eglinton Avenue, Yonge Street and Kingston Road. These streets are lined in many places with two- and three-storey retail-plus-apartment buildings from the 19th and early 20th centuries. Experts believe many of these buildings are underperforming and ought to be pulled down.

For instance, the buildings on Dundas Street West near Abacus house few people, and are unattractive to boot, aside from a few nice Victorian façades. “You could expect someone to tie their horse up out there,” Mr. Witt jokes. “I would say the scale of the street is probably the same as when it was built in the mid-1800s.” Abacus will occupy a spot where a squat and unattractive auto body shop once did business.

Mid-rises are seen as a way to intensify these neighbourhoods while arguably improving their aesthetic appeal. The report defines mid-rises as between five and 11 storeys, but in practice most would stand between six and nine. In Toronto, the width of the street determines the maximum height of a mid-rise. So a typical 27-metre-wide street can be lined with 27-metre-tall buildings, which works out to eight storeys.

Buildings on this scale could absorb a quarter of a million new residents over the next two decades. Sites for potential redevelopment equal at least 200 kilometres’ worth of sidewalk-level frontage, counting both sides of the street. Streets reminiscent of the scale of a European city street seem to be in Toronto’s future.

Having adopted the report’s recommendations two years ago, the city has indeed eased the approvals process for mid-block mid-rises, says Calvin Brook, an author of the 2010 mid-rise report. The city reasoned that “having the rules of the game understood would help incentivize the development community to start building more of these mid-rise buildings,” he says.

It has been working. Mr. Brook, a principal of the architecture and urban planning firm Brook McIlroy, cites other examples of mid-rises done right, including the Toronto Community Housing Corporation’s charmingly geometric 85-unit building at 60 Richmond St. E. and the Corktown District development by Streetcar.

As mid-rises proliferate, they could put large chunks of the city back on the map for first-time buyers. High prices for single-family homes on the side streets had put neighbourhoods like Ossington and Dundas out of reach.

As one would expect, many Abacus buyers have been lured to the area by the restaurants, galleries and nightlife blossoming on Dundas West and around the corner on Ossington. Perhaps more surprisingly, the sales centre has seen empty nesters as well. Mr. Johnston says many of the buyers already live in the neighbourhood.

Abacus will not be a fortress of hipsterdom.

Even residents who aren’t in the market for a condo have applauded the Abacus development, literally. “At a public meeting for this project, people actually did stand up and start clapping. That’s the only time that’s happened to me so far,” Mr. Witt says.

If the mid-rise revolution unfolds as planned across the 416, time will tell whether similar buildings will slot themselves into existing neighbourhoods as seamlessly.

See the full article at http://life.nationalpost.com/2012/06/19/mid-rise-condos-neither-tall-nor-single-storey-theyre-just-right/