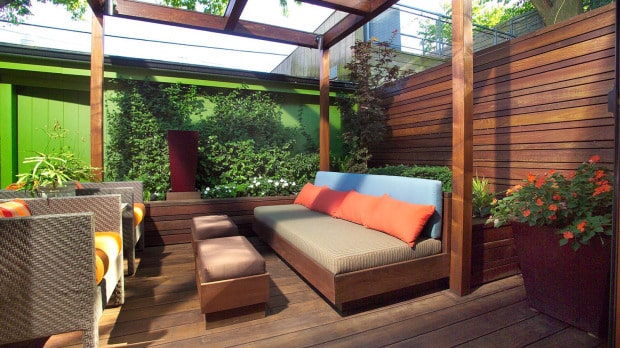 Paul Johnston's urban garden is profiled in the Globe and Mail.

Near Queen Street West and Spadina Avenue, a few doors away from the hubbub of Toronto’s Chinatown, Paul Johnston has created a tiny, shady refuge.

After he bought a Victorian-era row house on Sullivan Street, he put in a new kitchen and replaced the rear façade with a wall of south-facing glazing. That left him staring at a cramped back garden full of off-kilter patio stones.

Mr. Johnston is quick to admit that he didn’t give Ron Holbrook a lot to work with when he asked the landscape architect to design an outdoor room in the scant 11 feet between the rear of the kitchen and the front wall of the garage. Side to side, the lot is 15 feet.

“This is without question the smallest garden I’ve ever designed,” says Mr. Holbrook, who adds that the tighter the space, the greater the challenge.

Urban spaces may be compact, but most homeowners still want greenery, seating, lighting and a place to put the barbeque. Fitting all those components into a “room” puts the skills of a landscape architect to their best use, he believes.

“We’re much more architectural in our thinking and how we lay out the space,” says Mr. Holbrook. “It’s way more challenging than when someone gives me 20 acres.”

Mr. Johnston, a real estate agent, is encountering more buyers who want small, urban spaces that don’t fit the traditional notion of a garden or backyard. “Extensions of the living space, with design and architecture to fit,” is the way he describes the al fresco areas.

A few blocks away on Lippincott Street, Cecconi Simone Inc. designed outdoor rooms for each of the units in their Lippincott Living mews houses. “Our summers are so short that we really felt it was important to get the most out of an outdoor space,” says co-founder Elaine Cecconi.

At the front, an eight-foot-wide glass wall folds away to open the main floor to the exterior.

Melissa McCourt says this feature was one of the major reasons she purchased the unit in the funky Kensington Market neighbourhood.

“Smart infill is really hard to find,” Ms. McCourt says. She and her partner, Brad Cameron, have five children between them. With the outdoor room, everyone can hang out together.

A built-in dining bench on the inside is matched by another built-in on the other side of the glass to create the impression of one continuous line of seating.

“What we specified on the inside, we tried to emulate on the outside,” says Ms. Cecconi. “We really wanted to blur that line between the indoors and the outdoors.”

She adds that people who live in such an urban setting still want to feel connected to nature. The outdoor rooms are not heavily planted but they provide a haven.

“It’s a get-away really. It provides solace and solitude, which is rare in a city like Toronto,” Ms. Cecconi says.

Ms. McCourt added comfortable cushions. She sometimes moves the coffee table out there. Her daughter, nine-year-old Hannah Lisecky, invites friends over to create works of original art in chalk.

“They’re allowed to write on the walls,” says Ms. McCourt. “I don’t like to live too preciously.”

In cooler weather, she brings a space heater out to take the chill off.

Two of the neighbours at Lippincott Living, Craig Emond and Susan Tyndall, made their outdoor room luxurious with Danish Cane-line furniture.

The couple liked the folding glass which provides a lot more exposure to the outside than traditional patio doors do. They also appreciated the fact that the secluded outdoor rooms do not face the street.

“There are no cars in front of the unit,” says Mr. Emond.

The couple had searched for some time for real estate and they found that places that cater to a modern notion of indoor-outdoor living are extremely rare.

“The reality is, it hardly exists in the marketplace.”

Mr. Holbrook, the landscape architect, believes that changes in our interiors are prompting people to think differently about exteriors. Many homeowners are creating a clear view through the house to the exterior.

“We’re all living with so much glass,” says Mr. Holbrook.

On Sullivan Street he was persuaded to tackle the space by Mr. Johnston and his sister, Julia Johnston, who is a co-owner.

They asked for an outdoor living room, with a place to lounge on over-sized sofas. Mr. Johnston, who recalls spending many tedious hours helping to tend his family’s large garden, wanted as little maintenance as possible. He also wanted the architecture and furniture to suit his preference for modernist design.

Mr. Holbrook designed a floor, fence, pergola, planter boxes and built-in furniture – all of it from ipê. He recommended painting the garage wall green to blend with the euonymus. A Japanese maple, Boxwood and ferns fill the planter boxes. Mr. Johnston created the water feature himself with a planter and a pump he ordered through the internet.

The pergola adds structure and increases the sense of being in an outdoor room. It also holds a sophisticated lighting system.

“It’s important to have a ceiling,” says Mr. Holbrook. “Good lighting really connects the back of the house.”

The Johnstons considered adding a swathe of fabric to keep out the sun but they have found that the neighbour’s ash tree provides enough shade.

The barbeque is a stainless steel cylinder. Mr. Holbrook is all for keeping such features discreet. Sometimes he hides them behind a screen.

“I hate in a small garden when these things become the focal point,” he says.

Mr. Holbrook also points to a vast expansion in the available styles of furniture that make outdoor living more comfortable. A few years ago, nearly every backyard had a table, chairs and an umbrella, but few had sofas, oversized chairs and sectionals.

Mr. Holbrook advises clients to keep their indoor furniture in mind when planning for the outdoors.

“You have to look at the way it flows and the eye travels through,” he says. “You don’t want to be looking out at a sea of furniture.”

Paul and Julia Johnston use their outdoor room constantly for reading the paper on a Sunday morning or gathering with friends for a casual dinner.

“It really is an extra room,” says Ms. Johnston. “It makes the house that much bigger.”

When the humans decamp, their two dogs spend most of the day lounging around on the furniture, with the leafy canopy above.

“We don’t even try to keep the dogs off of it because they just love it,” says Ms. Johnston.

by Carolyn Ireland, The Globe and Mail

See the full article at http://www.theglobeandmail.com/life/home-and-garden/architecture/architecture-features/the-urban-rethink-goodbye-gardens-hello-outdoor-rooms/article2141654/singlepage/#articlecontent