The Townhouse Takes a New Turn 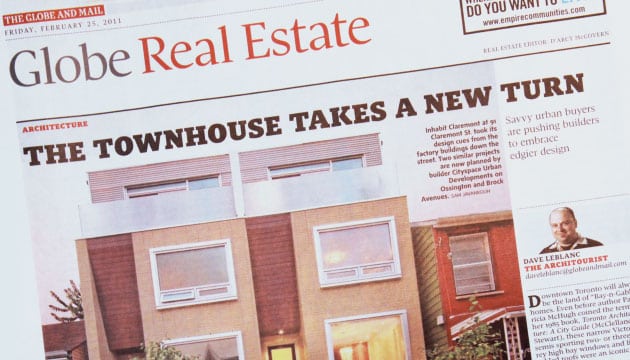 Downtown Toronto will always be the land of “Bay-n-Gable” homes. Even before author Patricia McHugh coined the term in her 1985 book, Toronto Architecture: A City Guide (McClelland & Stewart), these narrow Victorian semis sporting two- or three-storey high bay windows and little gabled roofs were an iconic symbol of the city.

Up until about eight or 10 years ago, infill builders were all too happy to provide us with modern interpretations of these – minus all that expensive ornament – and we were happy to buy them. It was a convenient arrangement: builders saved money and we didn’t have a choice.

And then a funny thing happened: with the invasion of modernist condominium towers, a new type of homebuyer was born. Good at reading floor plans, these design-savvy, skilled-in-choosing-finish-packages people longed for something bigger, unique… but still urban.

Because I’d written a column on the mysterious and fictional “Developer X” and the equally fictional modernist, infill townhomes that were “saving” our city back in January, I asked Mr. Johnston to take me on a small “architour” of some very real ones that are helping to change minds and offer real choice.

We meet at Cloud Free Agent Espresso Bar at the corner of Queen St. W. and Givins St. (also an ad agency – why not?). Much like the properties he represents, Mr. Johnston – dressed in tailored jeans and a crisp button-down shirt – is urbane, has a playful streak and delights in the juxtaposition of grit and polish. Above our heads is a small, stylish bit of townhouse work by Alan Littlewood, which Mr. Johnston calls “a helluva good-looking building.” This sets the stage for the rest of our tour.

“You should have seen them putting this up, it was mind-boggling the level of patience they must have,” says Shane Fenton about the Motif yarn logo by II BY IV Design Associates for the sales office at 41 Ossington Ave. “They literally went one screw, the yarn, one screw, it was… ”

“They come up with pretty neat stuff,” interrupts his father, Shelley Fenton. “I wish this was my office.”

Motif is a tight little building occupying a long, narrow site at the corner of Ossington and Rebecca St. It’s the handiwork of Raw Design, a tight little firm that’s fast rising to star status in the city. The bulk of the structure is pushed up against Ossington to form the five-storey loft portion (the top two storeys are tucked back to better blend with the three-storey building beside it); this allows the townhome portion to trail out like a three-storey tail along quieter Rebecca.

The townhomes are expensive at about $850,000, but they’re decked out in Scavolini, glass mosaic and engineered wood. “If the one-off buyer were to go and try and do it on their own… spend that time to try and capture what we’ve done here, the economics would just go out the window,” says the younger Mr. Fenton.

Lead architect Roland Rom Colthoff agrees: “These are people that would have bought a Victorian in the neighbourhood, but would have to renovate it.”

“And no one is building 1,800 square foot lofts,” adds Mr. Johnston. “So if you need that square footage and you want something new, you’re almost out of the market, which is wrong.” Legal rental basements (provided by the builder) mean buyers can lighten their financial load.

“You see the staircase on the second floor – that lands in your living room,” says Mr. Johnston, pointing. Beautiful and impractical, just like a supermodel: that’s what I decide as we stand at the corner of Richmond St. West and Stafford St. admiring Richmond Town Manors.

The staircase has no choice, really, since these towns are ultra-skinny at less than 13 feet wall to wall. On the outside, this Core Architects design is drop-dead gorgeous, exquisitely tailored in ipe wood and black brick. Inside, however, the narrow floor plan is “very challenging,” says Mr. Johnston. “They had quite a bit of trouble selling them because of that.”

These two-bedroom towns sold at a higher price ($850,000 and up) than the three-bedroom units on offer at Motif. Mr. Johnston finds this “questionable.

“When we build at this scale, we should be thinking about families and a two-bedroom house does not a family make.”

Across the street from the modern twins at 91 Claremont is a row of faux Bay-n-Gables built in 1987.

Mr. Johnston, who was involved in the design of Inhabit Claremont with his friend, builder Andrew DelZotto of Cityspace Urban Developments, says they referenced “the conversions, the little offices, the factory buildings” down the street rather than the smattering of authentic Bay-n-Gables.

Despite the economic downturn two years ago, both units sold for around $800,000, perhaps because they have income suites in the basement.

“One of reasons Cityspace did these was to see what the reaction would be,” says Mr. Johnston. It must have been good, as the website is promoting “Inhabit Ossington” and “Inhabit Brock” as “coming soon.”

As we wrap up our tour discussing other townhouse projects – Lippincott Living, Trinity Bellwoods Townhomes, Gallery Loft Towns – it occurs to me that all are located west of Yonge. What about hip east side neighbourhoods such as Leslieville or Riverdale? “The next stage is taking this type of product and applying it across the city, and in slightly suburban neighbourhoods,” says Mr. Johnston. “I believe this is perfect for places like Waterloo or Guelph.”

by Dave Leblanc, The Globe and Mail, Thursday February 24th, 2011

See the full article at http://www.theglobeandmail.com/real-estate/the-townhouse-takes-a-new-turn/article1919080/