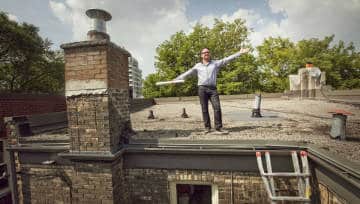 The developer thought it was a brilliant idea: Build a penthouse on top of an existing condo building in a chic Toronto neighbourhood to take advantage of the city’s insatiable lust for expensive real estate.

For $1.8-million, the new owner could walk into a brand new, 1,800-square-foot condo designed to her specifications. That was the idea, anyway. But the listing in prime Rosedale hit the market in February, just as sales were beginning to slow for real estate of all kinds, and no one was interested in the unit its agent has dubbed “Project Perch.”

The property is still for sale, but it no longer comes with an actual condo. Before a single brick was in place, the developer gave up and decided to try a different approach. For $599,000, a prospective buyer now gets blueprints, a stack of planning approvals and a list of local builders who can finish the project on the cheap.

“My gut instinct tells me the condo market is skewered right now,” said Paul Johnston of Right At Home Realty Brokerage, the listing agent on the project. “It’s been a hell of a year. At the beginning, we finally had buyers after a year of banging our heads on the wall looking for them. But I think this year’s deals have already been done.”

Following a spring marked by record sales and prices, growing evidence suggests that the air is finally beginning to go out of Toronto’s remarkably resilient condo market. The debate in real estate circles is now this: is it a temporary lull or the harbinger of a more serious decline?

The outlook for one the key economic generators in Canada’s largest city – a business that produces large numbers of construction and service jobs – hangs on that question. Toronto is North America’s new condo capital: Last year, developers completed about 16,000 units, twice as many as in New York and three times as many as Vancouver. As such, it’s closely watched as a barometer for the sector.

In July, the picture turned negative. The Toronto Real Estate Board said last week the number of sales in the city fell 25 per cent compared with June. While prices have yet to waver, anecdotal evidence of a slowdown is rife. Bay Street office workers point out that many of the newly opened condo towers in the downtown core appear to be devoid of all signs of human life.

Meanwhile, the supply of condos is surging. In the second quarter, buyers had a record 10,997 units to choose from. Another 34,089 units are under construction. Eighty-eight per cent of those units have already been sold, but another 5,000 units are expected to begin construction in the next three months.

An estimated 40 per cent of Toronto condos are owned by investors – many of them from overseas – who often buy multiple units and rent them out. That’s in contrast to the rest of the residential property market, which is dominated by people who live in what they own.

If the market were to weaken, and those investors disappeared, new projects would find it much harder to meet their sales and financing goals. Canadian banks typically require that a developer presell at least 70 per cent of the units in each building before the bank hands over any money.

In a worst case, investors might choose to cut their losses and rush to sell their condos rather than stick around and hope for a gradual recovery.

But not everyone is convinced that a downturn would spark a stampede to the exits.

“You hear about how so much of the market is made up of investors, and to me that’s not a scary thing,” said George Carras, president of RealNet Canada Inc., a tracker of real estate data. “These people aren’t investing to lose money; they are patient and plan to stick around.”

Condo prices have performed far better than equities in recent years, according to an index compiled by Mr. Carras’s company. And he believes the market’s fundamentals remain strong. Toronto needs about 40,000 housing units a year to keep up with immigration, he said. Restrictive building policies have made it difficult to build new communities of single-family homes within the city, forcing developers to build up instead of out.

But while demand might be there, it’s unclear when the market will bump against the limits of what people can afford. Prices have run up dramatically over the past few years. In 2003, new condos in Toronto sold at $294 per square foot on average. Last quarter, it was $565, or 92-per-cent higher. As unemployment remains high and consumer debt sits at the highest level on record, worries grow that the market is no longer tilted toward the smart investor.

“Condo owners shouldn’t assume they’ll always be able to sell their units at a profit,” said Kurt Rosentreter, a senior financial adviser at Manulife Securities Inc., who has been warning his clients off the asset class for the past year despite surging prices. “You see the big price gains, but you have to wonder about a breaking point – and that would be dangerous for everyone.”

So far, prices are holding firm: In the second quarter, the average selling price in Toronto gained 1 per cent to $331,000. And despite slowing sales, developers are asking more for less. The average asking price for the 23 projects launched in the last three months was $565 a square foot, a 12-per-cent increase from the same time last year.

“The big concern is we’re continuing to push pricing in the new sale market, and as you look at the rents the investors are able to charge, they certainly aren’t moving higher at the same rate,” said Ben Myers, executive vice-president of tracking firm Urbanation. “You have to wonder what happens next.”

by Steve Ladurantaye, Report on Business - Globe and Mail

See the full article at http://www.theglobeandmail.com/report-on-business/toronto-condo-market-hits-down-button/article1673760/